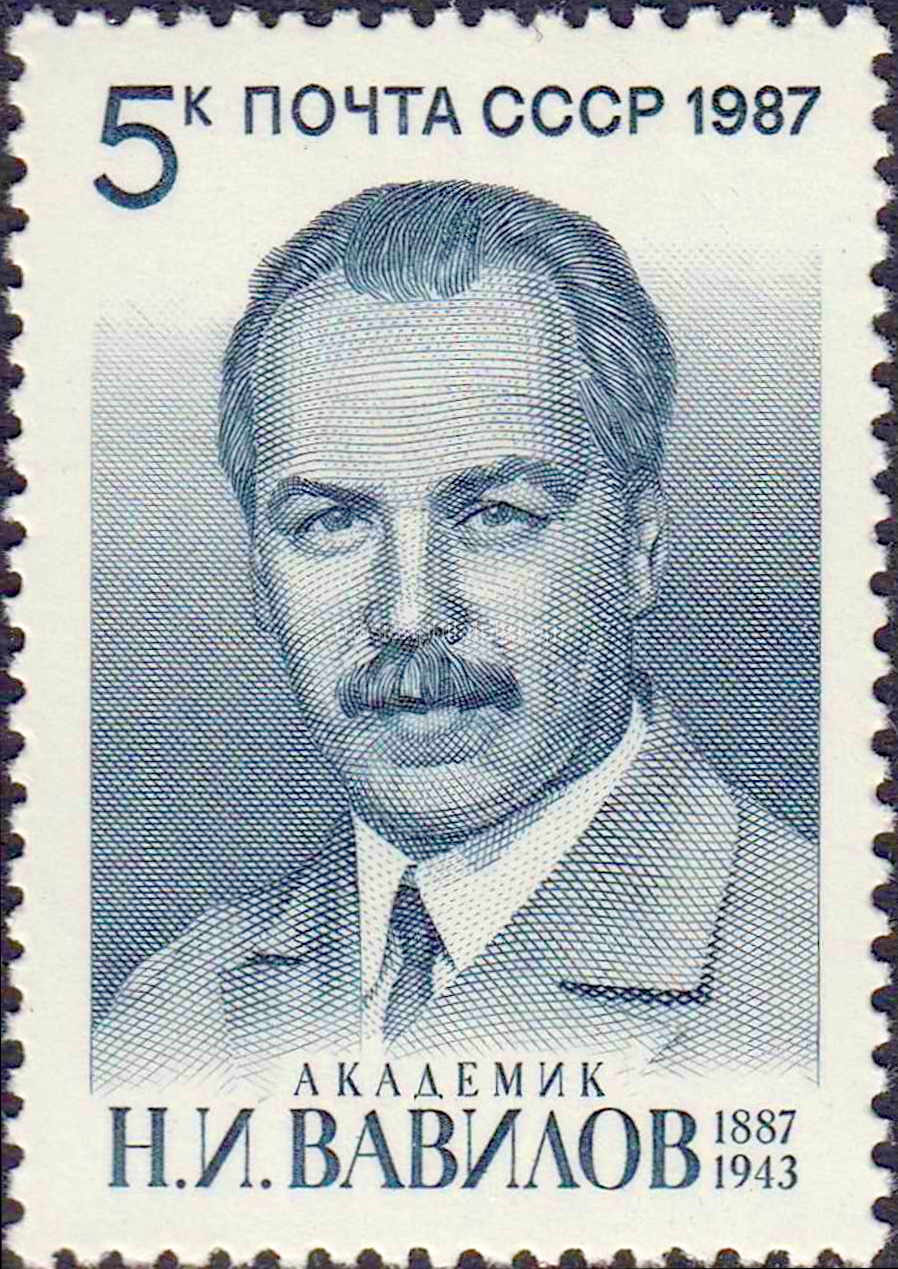 One prominent name in international biology is Nikolai Ivanovich Vavilov. One of Vavilov's most famous discoveries is his theory on Centers of Origin for Cultivated Plants, in which he correctly identified geographic centers of diversity for the most fundamental plants in the human diet. Vavilov organized a seed bank with over 250,000 samples of plant material in his pursuit to improve plant genetics. To read more about Vavilov's legacy of work, one recommended resource is Gary Paul Nabhan's book, "Where our food comes from: retracing Nikolay Vavilov's quest to end famine."

Vavilov's remarkable achievements and tireless work ethic were stifled during Trofim Lysenko's rise to power. Trofim Lysenko was an agricultural researcher who strongly opposed Mendellian genetics, such as natural selection and the chromosome theory of the gene. Lysenko's theories, later termed Lysenkoism, were founded on principles of self-sacrifice and self-improvement in challenging circumstances. In application, Lysenko's suggestions included sowing logging forests at extremely high densities, believing that the weaker trees will "self-timber" to give way to the numerous stronger trees in the forest. Perhaps most famously, Lysenko's incorrect beliefs about inheritance of vernalization in wheat caused millions to die in famines. Lysenkoism became Soviet agricultural policy due to the constellation of several factors. First, Stalin's campaign to collectivize farms actively targeted "wealthy" peasants, or kulaks. The result was a reduced population of farm labor that had to adapt to an entirely new system of food production. Between 1932-1933, food shortages caused famines throughout the Soviet Union, and Ukraine was particularly hard hit. This food crisis gave Lysenko an opportunity to point his finger at the "bourgois science" of genetics, and re-direct the course of Soviet biology with the promise of more profitable agriculture. The other key to Lysenko's success was the compatibility between Stalin's cultural aspirations for the USSR, and Lysenko's theories. Lysenko fabricated biological "proof" that self-sacrifice and hard work by one generation will create more resilience and strength in the progeny.

To read a summary of Lysenko's work and impact on the USSR, check out this web article by Sam Kean from the Atlantic. To read more about Stalin's ideas about the role of science in developing Soviet culture, check out Stalin and the Scientists by Simon Ings from Cornell's libraries.

Vavilov studied agricultural pests at the Moscow Agricultural Institute while completing his studies; his next professorship was at the University of Saratov. Vavilov's final and most prestigious position was at the Lenin All-Union Academy of Agricultural Sciences (VASKhNIL) in Leningrad, where Vavilov was director from 1924-1935. Yet Lysenko's influence was rapidly growing in Soviet government, and by 1937, Lysenko had become director of VASKhNIL.

In 1940, Vavilov was arrested for voicing his disagreement with Lysenko's theories. His initial death sentence was switched to 20 years of imprisonment; he often delivered lectures on plant biology to fellow inmates while imprisoned. In 1943, Vavilov died of starvation while in captivity. Back at the Institute, many scientists and researchers did not agree with Lyesnko's theories. One of Vavilov's projects was the creation of a seed bank, at the time, the largest collection of seeds in the world. During the Second World War, Leningrad was blockaded by Nazi forces, and nothing, even food, could enter the city. During this the 28-month siege, Vavilov's colleagues protected his seed bank, even though for some, not eating those seeds meant starving to death.  More can be read about the legacy of Vavilov's seed bank in Rakesh K. Simha's essay, The men who starved to death to save the world's seeds.

Vavilov's tragic fate is reflective of the gross shifts undergone by Soviet science under Stalin's rule. By Stalin's passing in 1953, Soviet biology was not the only field of science that undergone theoretic shifts to acommodate Lysenko's postulates. In 1955, 298 outraged scientists from multiple disciplines left their signatures on a scathing letter criticizing Lysenko's influence and intelligence. This letter, known as the Letter of 300, was the first, hesitant step that Soviet civilization took to ameliorate its relationship with international science. The Letter of 300 is available online in Russian thanks to the efforts of I. F. Zhimulëv and L. G. Dubnina, and an English translation is available on this LibGuide. For more information on the cultural tension during this time period, a good starting point is Kathleen E. Smith's paper titled 1956: Moscow's Silenced Spring. This paper examines the clash of expectations and ideals between Soviet students, researchers, and leaders in the years following Stalin's death. Smith is an expert on Soviet government, and to further explore the intersection of culture and Soviet leadership, you may wish to peruse the many books by Smith available at Cornell Libraries.

After Stalin's passing, the tragic death of Vavilov was soon regarded as, at best, a horrible mistake. As part of the process of De-Stalinization, Vavilov was pardoned of his crimes in 1955. Lysenko's hold on power officially ended in 1964, and the volume of publications honoring Vavilov and re-examining his work grew exponentially, peaking at 50 publications a year in 1968. The same year, VASHKhNIL was re-named the Vavilov All-Union Institute of Plant Industry. The peak of Vavilov's return to fame coincided with the 100-year anniversary of I. I. Michurin's birth. Michurin's name and science had been hijacked by Lysenko to the point of falsification: before the term Lysenkoism was coined (after Lysenko's fall from power), the term "Michurinist Biology" referred to Lysenko's science.

For more information about the rehabilitation of Vavilov in Soviet culture and the corresponding fall from grace of Lysenkoism, take a look at Eduard Kolesky's article, Nikolaĭ I. Vavilov in the realm of historical and scientific discussions.

Vavilov was not the only researcher whose stance on biology led to his persecution. The Russian-language website for the Historic Institute of Natural History and Technology has a table of Soviet biologists who were arrested, their lifespans, their areas of expertise, their public stance on Soviet agrobiology during Lysenko's dominance, and additional notes on their arrest dates and fate after arrest. 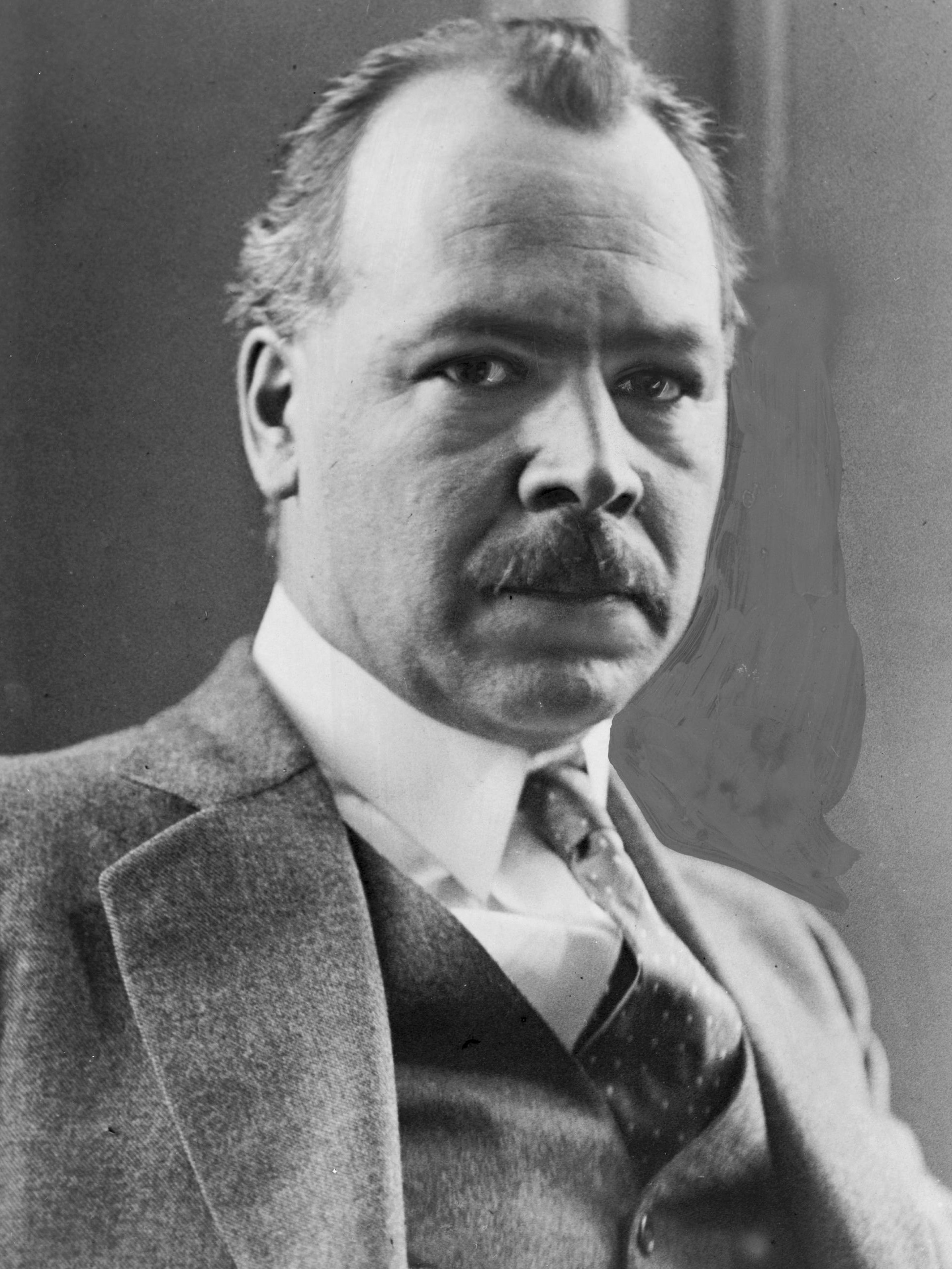 1932 was the year of the Sixth International Congress on Genetics, held in Ithaca, New York. The proceedings of the conference are held at Mann Library. The Congress was headed by Milislav Demerec and Cornell's Rollins Adam Emerson. One of the conference attendees was Soviet plant biologist and geneticist, Nikolai Ivanovich Vavilov. Although official Soviet biology was progressing further into Lysenko's theories of "Michurinist Biology" and renouncing chromosome theory and inbreeding, Vavilov was fascinated by research exhibits displaying the structure and function of chromosomes. One researcher who is renowned for her theoretic work on chromosomes is Barbara McClintock. McClintock completed her Ph.D at Cornell University in 1927. At the time of the Congress, she was studying maize cytogenetics at Cornell University. Vavilov wrote effusively about McClintock's exhibit:

"For our understanding of chromosomes, the star exhibit was the work of the young assistant to Cornell University, Miss McClintock. She displayed her remarkable preparations of corn chromosomes, allowing one to see the chromosomes' internal structure. This new technique made it possible to visually distinguish chromosomes, and to identify discrete chromosomal regions. Her astute understanding of the genetic background of corn could be seen by looking at the maps she created. These maps charted the distribution of genes over cytological scans, making it possible to connect the internal structure of the chromosome with the external phenomena of the genes. Miss McClintock was able to capture the conjugation of non-homologous chromosomes, and map the chromosomal sectioning of corn. This discovery is of huge significance, as all modern conceptions of genetics are based on the assumption that only homologous chromosomes conjugate."

(Written by N. I. Vavilov for the All-Soviet Academy of Agricultural and Rural Sciences in the name of Lenin: Institute of Applied Botany of USSR, available online in Russian at the All-Russian Research Institute of Plant Genetics. Translated to English by Anya Osatuke) 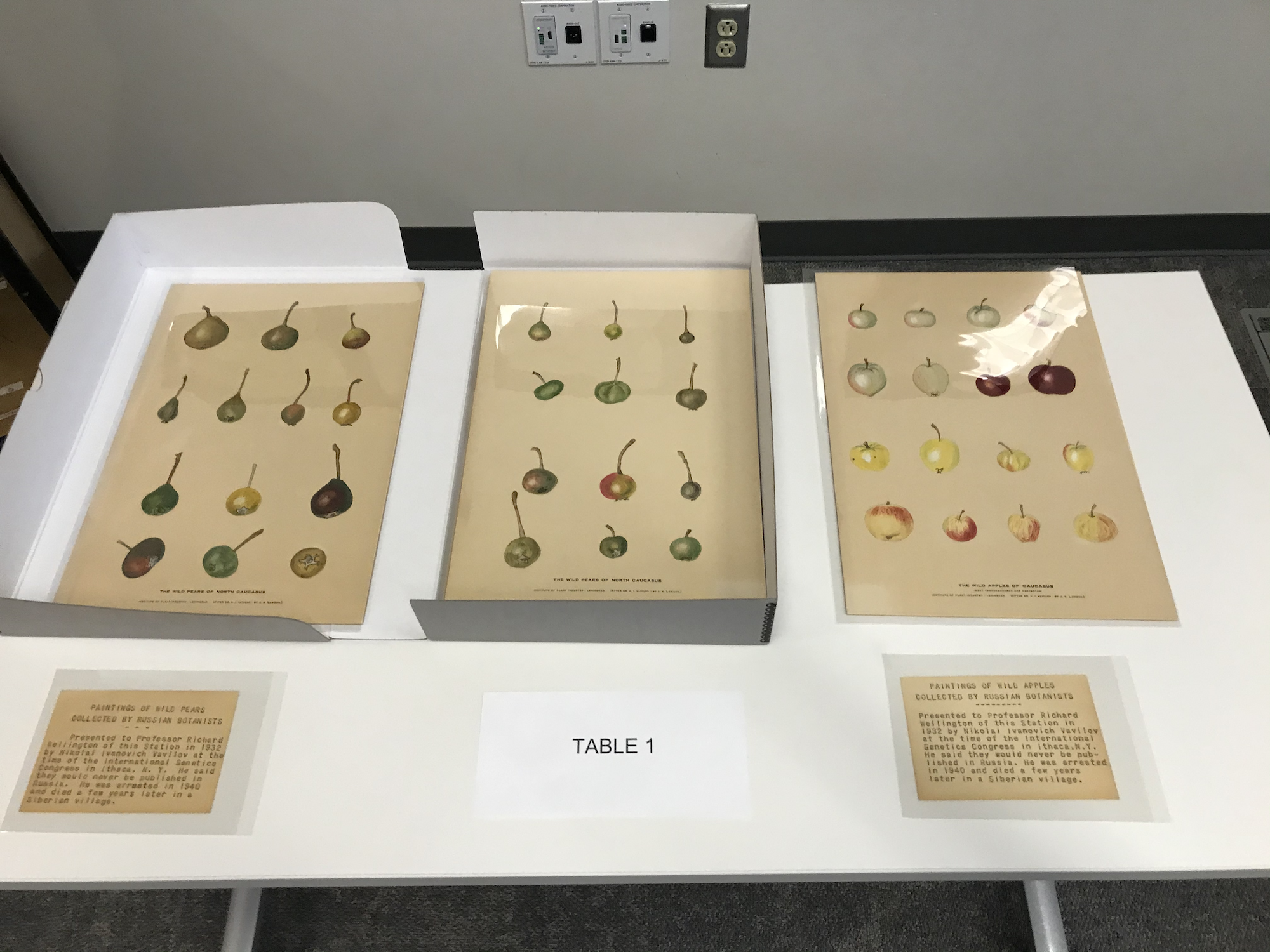 During Vavilov's 1932 visit to Cornell, he presented Professor Richard Wellington with a collection of botanical illustrations. These illustrations showcase the diversity of Malus and Pyrus species in Kyrgizstan and Kazakhstan. Vavilov explained that this work would never be published in the Soviet Union. These paintings are fully digitized and freely available at the Biodiversity Heritage Library.

How to Identify a Lysenkoist Text Using HathiTrust Full-Text Search

Lysenko and bees: a brief introduction

Lysenkoism advocated for beekeeper-driven selection of quality colonies. Hybrid colonies (derived from a mix of bee species) were considered risky, because mixed breeds were more likely to engage in bad behavior such as honey thievery and untimely swarming. Caucasian bees were considered the riskiest. Lysenko was strongly opposed to inbreeding, and his postulates suggested beekeepers should kill the queens of risky colonies, and insert a queen from a purebred colony. Queen bees were also killed when colonies began to show decline in activity, thus, queen bees over three years old were a rarity. Another way to guarantee good behavior for at-risk colonies was to feed the larvae with royal jelly from purebred colonies. Because food quality was seen as a major influence on behavior, bees in at-risk colonies were to be fed honey sourced from "good" colonies over the wintertime. By the time Lysenko came to power in the USSR, collective farms were very widespread and most bees were kept in frame-hives.

Here is a list of terms that can help you identify Lyesnko's influence in a Russian-language text.

Definition: A term coined by Lysenko, vernalization is a means of inducing flowering in plants, by exposing the plant to a prolonged cold period. While vernalization is a proven and effective biological phenomenon, Lysenko's error was in the claim that the experience and changes from vernalization could be passed on from parents to offspring.

Definition: A catch-all term for what would later be dubbed Lysenkosm, Michurinist biology formed the logical foundations of Lysenko's biological doctrine.

Definition: if you see a text published between 1935-1980 that mentions Lysenko by name, that usually indicates that the author is citing him in a positive light.

These terms indicate a Stalinist text, but do not by themselves indicate Lysenkoist science:

Definition: Although it's easy to assume that a communist society had no classes, while the Soviet Union was building communism, all citizens were assigned a class and many did not agree with how they were classified. There were three main classes for peasants, or "krест'i͡anin": the poor peasant "krест'i͡anin bedni͡ak", the middle-wealth peasant "krест'i͡anin ceredni͡ak", and wealthy peasants, called either "sostoi͡atel'nyĭ krест'i͡anin" or "kulak". Wealthy peasants, and eventually middle-wealth peasants, were targeted by the Soviet state as enemies of the people. They are discussed in beekeeping texts as a population statistic, or as opponents to rational beekeeping and collectivization.

Definition: Enemy of the people was a broad and changing term used by Stalin and adopted by many individuals who had some political power in Stalin's USSR.

Definition: A member of any church, but most often a member of the Eastern Orthodox Christian church.

These terms may seem political, but were used by many authors in an apolitical sense:

Definition: The Russian word for enemy, if you do not see "Vrag" immediately followed by "naroda", then a beekeeping text is likely discussing the natural enemies of bees: mice, mites, or wasps.