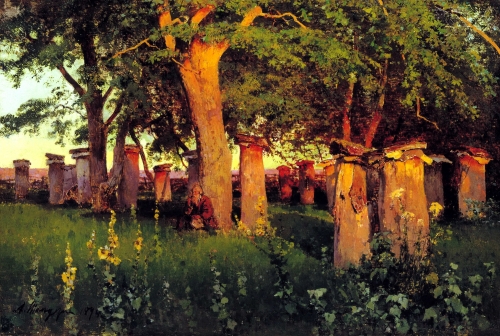 Geographic distinctions between territories differed slightly between Russian Empire, Soviet Union, and Russian Federation. Territorial distinctions are briefly summarized below, starting with smallest and ending with largest. Titles of territories will be written in the pluralized Russian form in the explanatory paragraphs, and written in the singular form at the heading.

Descriptions of the territories will occasionally refer to the 1861 liberation of the serfs, part of the emancipation reform signed by Emperor Alexander II. A detailed examination of the pros and numerous drawbacks of this societal change is available at History Today's post on the subject.

Serf is the term used to describe an indentured household servant. Unlike slaves, serfs were not officially owned by an individual, but were tied to the land which they worked. In practice, this often did not change their poor treatment and destitute lifestyle. However, serfs were legally capable of completing enough work to liberate themselves, and then would become full citizens with all of the accompanying rights.

The Russian-language term for serf is Krepostnoĭ, but occasionally serfs are lumped in with the catch-all term for a peasant who lives off of their agricultural labor, Krest'i͡anin.

A derevnii͡a is roughly equivalent to a hamlet, a small settlement consisting several log or brick cottages. In the Russian Empire, these were usually permanently inhabited by various sorts of peasants. These hamlets usually did not have a church, instead being located close to a more centralized village with stores, railroad tracks, and a church. A selo was a small village that differed from a derevnii͡a by having a church within its bounds. This was connected to the greater economic connection of a selo, and villagers intending to sell wares would travel to their nearest selo to gather more interest for their goods. If the word selo does not follow a location's name, you can still identify a selo by the spelling, as most selos' names end in the letter "o" or "oe", such as Balabanovo or Ekaterinskoe. But note that these distinctions can be lost or altered during declension: in (v) Balabanove, from (iz) Ekaterininskogo, and so on. Russia Beyond the Headlines has a collection photos of Boldino, the selo where Aleksander Sergeecvich Pushkin wrote many of his well-known works.

A mir, obschina, or selskoye obshchestvo was a sort of peasant village community, where land was owned communally. In the case of Mirs, which existed long before the liberation of the serfs in 1861, families were allocated strips land based on people per household. These strips were graded by value depending on soil quality as well as size; after several years, the strips were re-distributed between the families as soil quality and family size changed. The inhabitants of these villages could be either free peasants or serfs.

A volost was composed of several mirs, and was an example of a territory largely ruled by members of the peasantry. After the liberation of the serfs in 1861, a volost would be led by a group of elected representatives sent from the the mirs which composed the volost. These leaders were called Selskie Starosty and Volostnie Starshine. A volost was required to have between 300-2000 male inhabitants, and a parorchial school. The Russian Governmental Library has made available online an 1880 text by V. Volchkov which details the rules and expectations for the elected officials of the mirs.

Uezdy can most closely be likened to the American term "county". In texts published before 1708, the term indicated a group of volosts that surrounded an important city. The term was abolished in a 1708 reform by Peter the Great, instead using guberni (described below) as geographic units. But 19 years later, Uezdy were re-enstated by Catherine the Great, as a geographic unit nested within guberni.

Territories that were too distant from central regions to be classified as uezdy, but had military importance, were called razri͡ady.

Guberni, referred to in English as governorates or provinces, were the largest subdivisions of the Russian Empire. The term was originally brought about by Peter the Great in 1708. Initially, the Russian Empire was split into eight Guberni.

Oblasti were remote areas covering wide swaths of land, far away from large cities and administrative centers. Oblasti had less autonomy than gubernorates, but were equivalent in size.