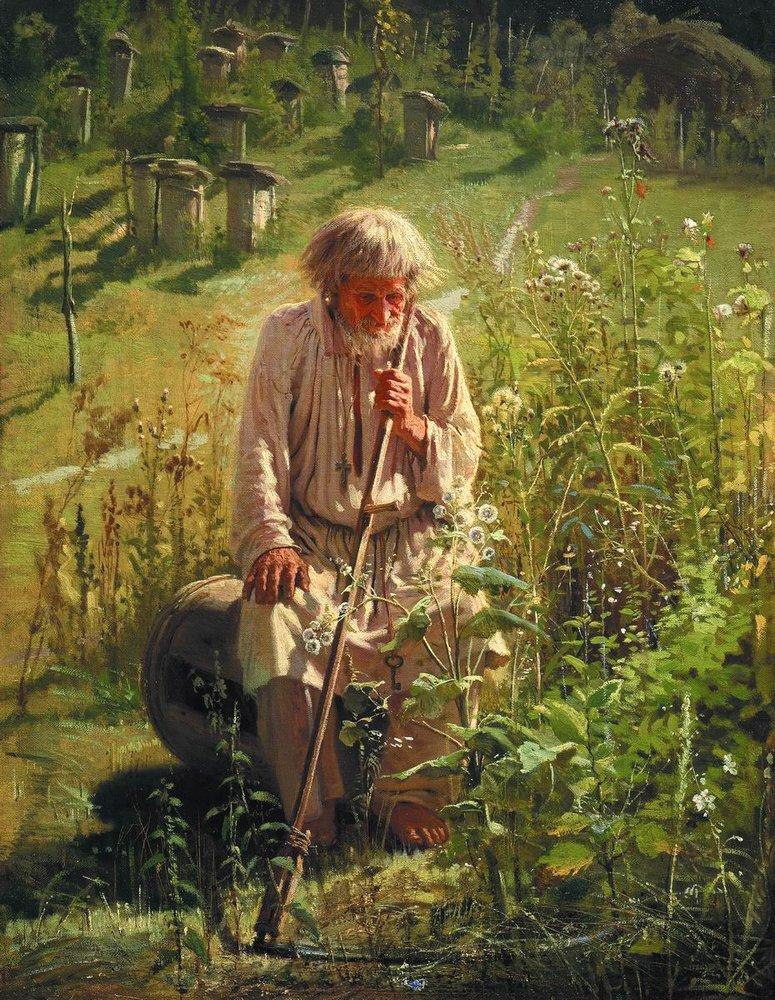 1721: Peter the Great and the Popularization of Writing and Reading

Peter the Great (1672-1725) was the first, and arguably the most famous, leader of the Russian Empire. Before Peter's reign, the territory was called the Tsardom of Russia. The Tsadrom of Russia began during reign of Ivan the Terrible in the 16th century. Peter the Great oversaw reforms to Russian geography, language, culture, and church-state relations. The website Heritage History has posted an abbreviated timeline of Peter the Great's relations, decrees, and military accomplishments.

Peter the Great oversaw the popularization of printing press, and reformed the language's orthography to create a more accessible, printable Russian alphabet; before this, manuscripts were the way the written word was spread. These language reforms gave rise to a different sort of book culture, where novels and texts for a wider swath of the population suddenly became available to read as well as compose... if the work passed censorship. Benjamin Rigburg has written a detailed account of governmental censorship in his publication, "The Efficiency of Tsarist Censorship Operations, 1894-1917."

1861: Liberation of the Serfs and Societal Change

In 1861, Emperor Alexander II passed a decree calling for liberation of the serfs, indentured agricultural servants. In terms of beekeeping, this societal shift introduced a large body of rural-dwelling, agriculturally-skilled citizens. Liberated serfs had the legal right to beekeep, but few funds with which to build huts and obtain beekeeping supplies.

It is possible that this shift in demographics brought about a sudden increase in ecologically-destructive beekeeping practices, as newly-liberated serfs lost what safety net was provided by the landowners they labored for. Honey could be sold or kept for a long time for personal consumption, thus having honey stores was likely very advantageous for the destitute liberated serfs. Soviet texts describing beekeeping in the Russian Empire mention a period of time between the 18th and 19th century, when beekeeping dwindled in profitability due to an exhaustion of natural resources. The connection between the economics of the peasant class and beekeeping in the Russian Empire hasn't been researched much, but this topic may be of interest for future study.

For half a century, large communities of liberated serfs cohabited in mirs, zemstvos, and other small villages, farming for their sustenance and selling their excesses at markets or on railroad paths. But the degradation of soil quality from  rural overcrowding resulted in a bleak and miserable existence for many.

A few years before the communist uprising altered the trajectory of Russian society, Prime Minister Petr Aleksandrovich Stolypin implemented a series of agricultural reforms intended to turn peasants into farmers. These reforms were in large part in response to peasant uprisings in 1905-1906. These uprisings were in multiple regions of the Russian Empire, and the grievances aired by the peasants were primarily financial: the communal land allotment system resulted in peasant families becoming financially tied to land that was too small to farm, declining in soil quality, and too distant from profitable work. Living conditions were increasingly poor for the peasant class, and the fiscal reality of land allotment led many to loot and pillage in desperation. These uprisings were even held in areas believed to have abundant natural resources, in the Black Earth Belt-- rural overcrowding and over-farming had depleted the natural resources of these territories.

Stolypin's reforms were intended to increase the value of the peasants' land holdings, eliminate communal village styles such as the Mir, and offer peasants affordable lines of credit for private land ownership. Ultimately, the reforms were intended to create farmers interested in making a profit-- and supporting a government that would aid them in doing so. Stolypin's reforms developed agricultural cooperatives to support private farmers, and developed a basic system of agricultural education.

For a closer examination of Stolypin's agrarian reforms, take a look at George Tokmakoff's 1971 article: Stolypin's Agrarian Reform: An Appraisal.

1917: Collapse of the Russian Empire

On March 15 1917, Tsar Nicholas II abdicated the throne and a Provisional Government was established. The Provisional Government collapsed when the Bolsheviks, led by Vladimir Il'ich Lenin and Aleksander Aleksandrovich Bogdanov, seized power on November 7 1917. The secret police, or Cheka, was established the following month. Then began the Russian Civil War, between the "whites" (bely'ie), who were loyal to the throne, and the communist "reds" (krasny'ie). The Civil War lasted from June 1918 to March 1921, by the end of which the Russian Empire was definitively no longer.

Stolypin's agrarian reforms were designed to support the Tsarist state, and thus could not be kept in their entirety by Soviet powers. But the support for farm cooperatives and agricultural education became key elements of Soviet agricultural policy.

Before there was a Russian Empire, there was ancient Rus'. Mentions of beekeeping in ancient Rus' are often very rosy in nature, describing high honey and beeswax yields-- some say even higher than modern yields. There are indeed records suggesting that as early as the twelvth century, the main exports of Rus' were furs, honey, and wax (the latter two were dubbed "soft gold").

Initially, those who wanted to get honey in ancient Rus' would practice "Bortnichestvo", or honey-hunting, where a person would scale up a tree and steal the honey from a wild colony. The colonies were either living in a naturally-made tree hollow or "duplo", or a man-made hollow, drilling a hole 4 to 15 meters high in a tree trunk. The first record of honey-hunting in ancient Rus' dates back to the fifth century, and it was practiced in some capacity up through the seventeenth century.

In contrast to honey-hunting, beekeeping requires some allocation of land, the construction of a hive, and some time commitment throughout the seasons. The gap between keeping bees in an apiary and honey-hunting was gradually bridged, as honey-hunting developed into an organized practice. Honey-hunters would classify trees into three types: young trees that could have hollows drilled in later, trees with hollows that do not have a colony inside, and trees with a colony in their hollows. Over time, honey-hunters would try and choose trees closer and closer to their homes, and eventually discovered that they could simply chop down a tree, plant the top half in a meadow near their village, and keep bees in such stumps. These are called "kolodnye ul'i͡a" or "borteviye ul'i͡a". Just as in honey-hunting, the colonies that inhabited these stumps were wild, and the stumps were destroyed alongside the colony when honey and wax were collected.

As you scroll through the "Russian Empire" section of this LibGuide, you will see several depictions of these "well-hives" in old Russian apiaries.

Ancient Rus' turned to the Tsardom of Russia in 1547, and in 1721 became the Russian Empire under Peter the Great.

Starting in the eighteenth century, there seemed to be an ecologic regression that made honey-hunting unsustainable, and beekeeping began to decline. It is also possible that agrarian and economic reform played a role in this shift. The Russian beekeeper Petro Ivanovich Prokopovich (1775-1850) is credited with creating the first dis-assemblable frame hives. Prokopovich enjoyed great success in his apiary, and his hive design is usually mentioned as the start of modern Russian beekeeping. Inserted is a diagram of Prokopovich's hive. 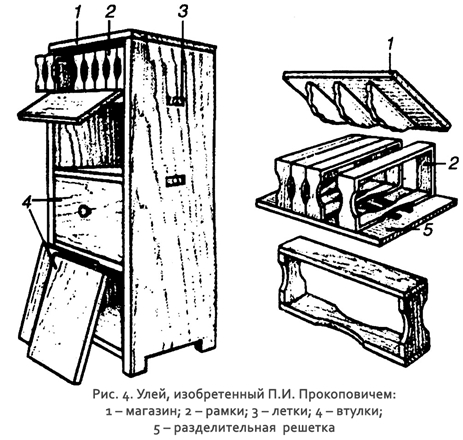 American clergyman and beekeeper, Lorenzo Lorraine Langstroth (1810- 1895) invented the modern Langstroth hive that is massively popular to this day amongst beekeepers; Langstroth added the vital concept of "bee space", or the width of a pathway that a bee will travel through without filling it up with wax. This allowed for much easier dis-assembly of beehives come harvest time. After the advent of the 19th century, Russian beekeeping continued to benefit from the findings of authors such as Aleksandr Mikhailovich Butlerov, Anatoliĭ Stepanovich Butkevich, and others.