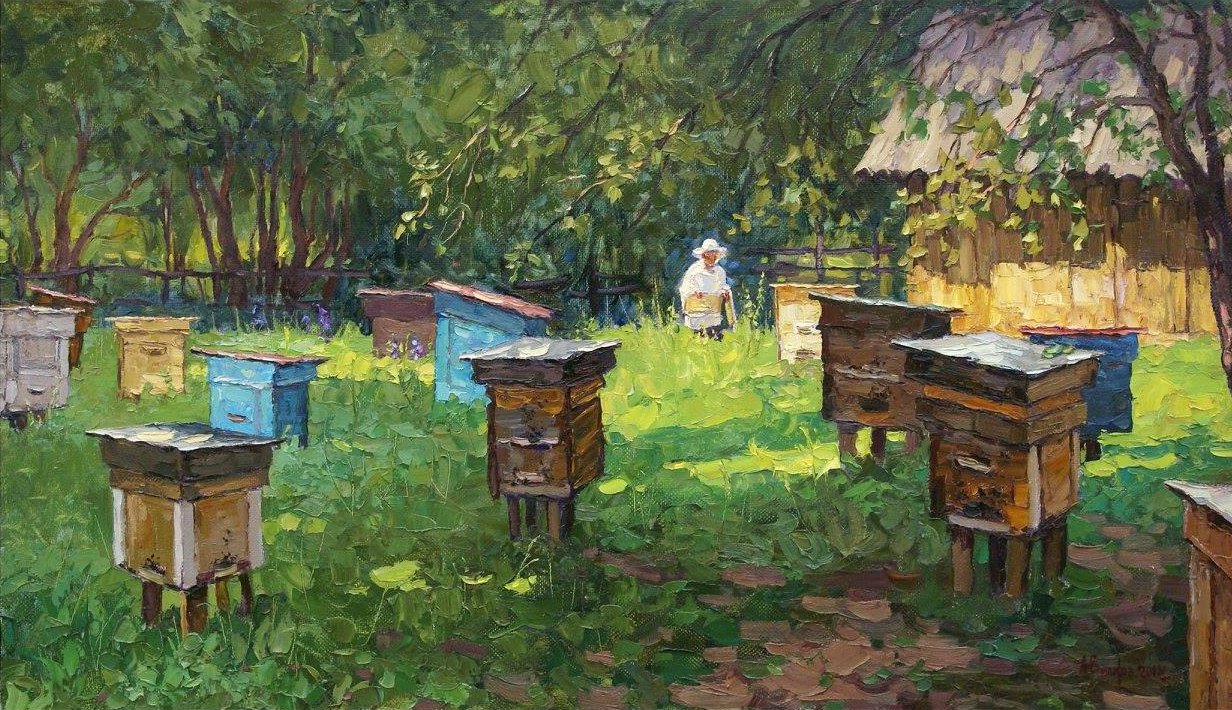 In the mid-1920's to early 1930's, there was an an explosion of beekeeping publications for the new Soviet beekeeper. Beekeeping texts were often colored with political rhetoric, and none as much as the monthly beekeeping periodicals such as Prakticheskoe Pchelovodstvo (Practical Beekeeping) and Kollektivnoe Pchelovodnoe Delo (Collective Beekeeping Business). These periodicals had their finger on the pulse of Soviet agricultural reform, and would often publish the latest governmental decrees as they affected beekeepers, as well as occasionally serving as sources for funding, themselves. In the mid-to-late 1920's, Prakticheskoe Pchelovodstvo promoted individual research in beekeeping by publishing the anecdotal discoveries of its readership. At that time, these periodicals were intended for private beekeepers of low to medium means, indicated by the terms "krest'i͡anin bedni͡ak" and "krest'i͡anin seredni͡ak" (literally, poor peasant and middle peasant), as well as some members of the clergy, who had the unflattering title of "religioznie kultisty" (religious cultists). Rhetoric promoting collectivization and adoption of practical beekeeping practices was gentle and upbeat in nature.

As time went by, increasingly disparaging rhetoric was directed at peasants of high to medium means, or "kulaki", and religious cultist readership was reported to drop in annual summaries of the periodicals' accomplishments. Another sub-group of the Russian population in need of reform, was the sizeable population of "Kolodniki," or beekeepers who favored beehives made of stumps rather than frame-hives. However, most rhetoric surrounding Kolodniki portrayed them as clueless or misinformed rather than class enemies. Alongside this shift, sate directives called to increase beekeeping efficiency and collectivize peasants; it became increasingly important for beekeeping periodicals, as state-sponsored publications, to encourage peasants to relocate from individually-owned homesteads that were established by Stolypin's agrarian reforms of 1906-1911, to collective farms, or Kolkhozy. By the early 1930's, collective farms were the default goal for Soviet progress. In the context of a collective farm, beekeeping was studied as a means of increasing crop yields. As the face of the average beekeeper shifted from a private individual to a member of a collective farm, so did beekeeping publications merge into one powerhouse, state-approved periodical: Pchelovodstvo (Beekeeping). Tellingly, around the time of the merger, research itself was taken out of the hands of citizens and made the responsibility of government-funded institutions. Beekeepers were urged to not experiment, innovate, or even proselytize about bees; all of these activities would take away time, energy, and resources that could be used to maximize yields.

Innovations in science and technology

The USSR's rapid industrialization and explosion of literacy meant that more of the population had an opportunity to research beekeeping and apply their knowledge to science and industry. Publications concerned with making extraction of beekeeping products more efficient would quickly become dated, yet serve as a record of the steps the USSR took in adapting to shifts in population structure. At this time, we also see the creation of a new narrative about beekeeping in the Russian Empire; traditional beekeeping methods are denigrated as wasteful and destructive, while Russian and Ukrainian apiculturalists from modest backgrounds resurface as cultural heroes.

Competition against the science of capitalist nations peaks between 1935-1965, and after 1970, more and more foreign-language research is published for Soviet readers. The goals of Soviet beekeeping are to create efficient collective farms and manufacture a standardized product in high volumes. To accomplish this, apiculture research takes on food science, pollination processes, bee fertility, and bee diseases.

Under Stalin, beekeeping became the work of collective farms, or kolkhozy. Beekeeping gained a reputation as safe and humble work, but honey production itself possessed patriotic character. In a 1943 text published at the end of WWII, researcher S. A. Rozov describes Soviet beekeeping as "the most powerful beekeeping in the world." Beekeeping became recommended work for the elderly, women, children, and people with disabilities-- particularly war veterans. The tenuous relationship between the Soviet state and its veterans is analyzed in depth by Anthropologist Sarah D. Phillips in her essay, "There Are No Invalids in the USSR!"

In science and agriculture, beekeeping suffered under the rule of Lysenko, whose culturally-appealing theories caused widespread famine and crop failure in the USSR. Several beekeeping authors in Cornell's libraries subscribed to Lysenko's views. The punishing attitude towards bee colonies that cannot pass muster is perhaps the only hint towards Stalin's brutal handling of Soviet farm labor, including beekeepers.

Outside of scientific publications, most rhetoric surrounding beekeeping published between 1935-1970 is idyllic and optimistic. Just as Socialist Realism became the primary art form that could pass censorship, discussions of farm life by non-researchers were were restricted to pastoral depictions of life in beautiful Soviet nature.