Old Beekeeper in his Apiary. Voronezh Governorate, 1908. No known copyright. 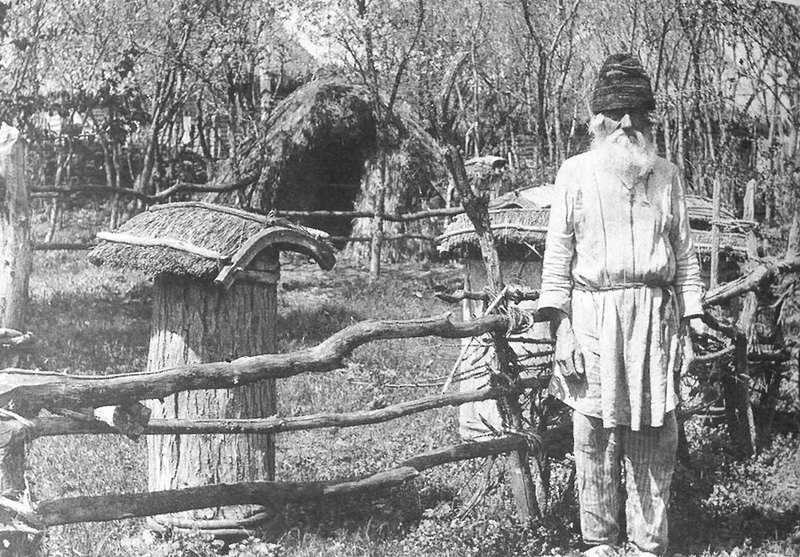 The hard sign used to be a much more frequent letter in Russian publications, as it was added to the end of every word that ended in (Ш ш), (Ж ж), (Ц ц), and was a frequent end letter of most words. The hard sign was not added to words that end in the soft sign (Ь ь), the letters (Щ щ), (Ч ч), and (Й й). For a more detailed explanation of the hard sign's function in words before and after the orthographic reform of 1917-1918, check out Live Fluent's informational post. The hard sign and soft sign were first introduced to the Russian language under the direction of Peter the Great (1672-1725). Martha A. Holland of University of Hawaii at Mānoa wrote a highly informative paper discussing the forces behind orthographic reform in the Russian Empire over time. Some familiarity with the phonetics of the Russian alphabet is helpful, but not essential, when reading this text.

The hard sign's presence didn't affect pronunciation, and was removed as a letter to end most words with during the orthographic reform of 1917-1918. This element of the reform became a political issue for some, particularly Russian Diaspora who fled to other countries during the Civil War-- to indicate allegiance to the Russian Empire in spite of Soviet rule, they would continue to write words with the hard sign beyond the year 1918.

One historic example relevant to these old letters can be seen in the famous novel, "War and Peace." In Russian, the novel's title is written as "Война и Мир," or "Voĭna i Mir". Prior to the orthographic reform of 1917-1918, the title was written as "Война и миръ" . The word миръ means "peace," and is romanized as "Mir" ." There also existed the word "міръ," which means "world" and would be romanized as "Mīr" ." After the orthographic reform of 1917-1918, the simplification of the alphabet gave rise to a single word with dual meaning.

The Russian language that we read today was only fully codified in 1956. Between 1956 and 1918, most texts that you read will follow modern spelling rules, with occasional digressions from the traditional spellings. Particularly in texts published before 1917, you may encounter the characters

The character (I i) has been replaced in modern Russian by the character (И и), as it corresponds to the English "long e" sound "Ē ē" as in "speech". Note that this letter can still be encountered in Ukrainian text, where (I i) makes an "Ē ē" sound while (И и) makes an (Ы ы) or "Y y" sound.

To read more about differences between Ukrainian and Russian alphabets, the Learn Ukrainian website has a handy page describing the differences in letters and grammar. In old Russian and modern Ukrainian texts using (I i), the character is transliterated to "Ī ī".

The character has (Ѵ ѵ) been replaced in modern Russian by the character (И и), just like (I i). But to distinguish between the two similarly-sounding letters, in texts using (Ѵ ѵ), the character is transliterated to "Ẏ ẏ".

More information, including exceptions and application of these old letters in spellings, can be read at the Slavic Cataloging Manual's Pre-Reform Russian Orthography Cheat Sheet.