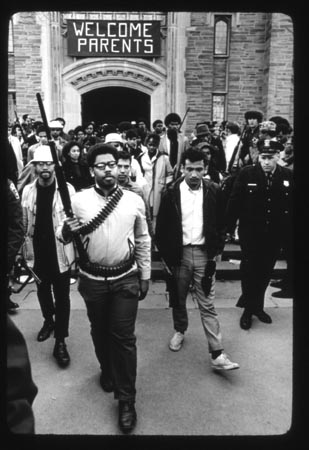 On April 19, 1969, students (mainly Black) occupied Willard Straight Hall during Parents' Weekend as a continuing form of protest about racial issues on Cornell University's campus. Citing the university's "racist attitudes" and "irrelevant curriculum," the students occupied the building for thirty-six hours. The takeover received national attention as thousands of Black and White students became involved, which engaged the community in broad discussion about race relations and educational matters. For many the image of students leaving the Straight with guns is the only lasting memory they have of the takeover. However, it was more than that. The guns were introduced in the seizure of a building only after groups of White students had attacked the Black students occupying the Straight. After the peaceful end of the takeover, Cornell introduced a curriculum in Africana Studies and established the Africana Studies & Research Center.

The purpose of this study guide is to provide an entry point in locating materials about events leading up to the Willard Straight Hall occupation and its aftermath.