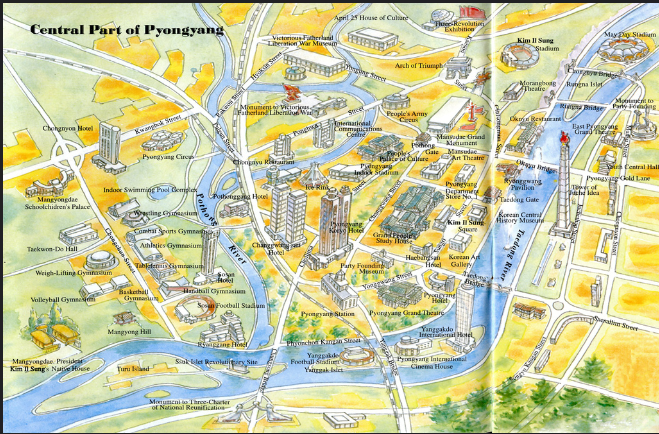 ﻿Pyongyang is a city of more than three million people -- government officials, Party members and their families, diplomats and privileged workers living there by permission only.     Important originally as a trading center and fortress, in 427 A.D. it became the capital of the Koguryeo Dynasty under King Changsu.  Over the centuries it was attacked, abandoned, raided by various invaders and rebuilt several times.  In 1894 the Japanese occupiers burned a third of the city. They were defeated by the Russians in 1945, who occupied the north until the DPRK was established in 1948.  During the Korean War U.S. and U.N. forces leveled much of the city in bombing raids.  Pyongyang was rebuilt along the east and west banks of the Taedong River as a showcase capital with wide boulevards, parks, monumental sculptures, impressive cultural and sports venues, vast blocks of flats and (often unoccupied) office buildings and hotels.

Chollima Street was named for an ancient mythical steed who could rapidly cover great distances. “Chollima speed” became the byword for achieving the fastest possible production and construction.﻿

The Korean Workers’ Party Monument was built in 1995 (Juche 84) for the 50th anniversary of the founding of the KWP.  The Party is the ruling entity of North Korea and the promulgator of the concept of Juche originated by Kim Il-Sung.   The monument has a hammer, sickle, and writing brush representing workers, farmers and intellectuals.   The slogan around the outside of the ring reads “Long live the Workers' Party of Korea which organizes and guides all victories for the Korean people!"

Two fountains rise in the Taedong River between the Juche Tower on the right bank and Kim Il-Sung Square on the left.  On Rungna Island, beyond the fountains, is the modern May Day Stadium, home of the famous mass Arirang Games.

Across the river from the Juche Tower is Kim Il-Sung Square and the Grand People’s Study House .   The Square, venue for mass rallies and parades, is more than 800,000 sq. ft.   The Study House is a library with 30 million books and 600 rooms, and can accommodate 12,000 users a day.

Beyond the Square is the "Forbidden City," a gated, guarded government HQ and residential quarter where elite party and other officials and their families live and work.  (One of the revolving restaurants on top of the twin-tower Koryo Hotel was closed when it was discovered that it had too good a view of the Forbidden City. According to NK News, nearby apartrment buildings have had their windows blocked  to prevent viewing  Party HQ and activities in the complex.)

The Grand Monument, a 60-ft. tall bronze statue of Kim Il-Sung, was joined in April 2012 by one of Kim Jong-Il which was recast and unveiled again in October to show him in his trademark anorak instead of a suit and coat. The Mansu Hill Monument is an important destination for citizens, tourists, and foreign visitors who are given bouquets to lay at the feet of the statues.    Behind the figures is a 70-ft. wide mural of Mt. Plaektu on the façade of the Korean Revolution Museum.

The Arch of Triumph   Three meters taller than the Paris Arch of Triumph, this was erected in 1982 and commemorates Kim Il Sung's triumphant return to Korea after WWII.