Small peaceful protests started on 26 January 2011 in Syria and escalated to an ongoing internal conflict. The wave of Arab uprisings that began with the Tunisian revolution of January 2011 reached Syria in mid-March, when residents of the small southern town of Dara’a took to the streets to protest the torture of students who had put up anti-government graffiti.  The unrest spread to other parts of the country. Protesters demand reforms, the ouster of President Bashar al-Assad, allowing political parties, equal rights for Kurds, and broad political freedoms, such as freedom of the press, speech and assembly. The Syrian government has made several concessions, though widely considered trivial by protesters. On 21 April, the government formally declared the repeal of an emergency law that had been in place since 1963 and which allowed the government sweeping authority to suspend constitutional rights. The same month the Syrian government launched the first of what became a series of crackdowns, sending tanks into restive cities as security forces opened fire on demonstrators. Security forces used tanks and snipers to force people off the streets. Water and electricity were shut off and security forces began confiscating flour and food in particularly restive areas. The conflict is complicated by Syria’s ethnic divisions. The Assads and much of the nation’s elite, especially the military's, belong to the Alawite sect (Nuṣayrī), a small minority in a majority Sunni country.  By October, estimates for the death toll ranged above 2,900, and human rights groups said that well over 10,000 people had been arrested. Syrian dissidents formally established the Syrian National Council which included representatives from the Damascus Declaration group, a pro-democracy network; the Syrian Muslim Brotherhood, a banned Islamic political party; various Kurdish factions; the Local Coordination Committees, a group that helps organize and document protests; and other independent and tribal figures. 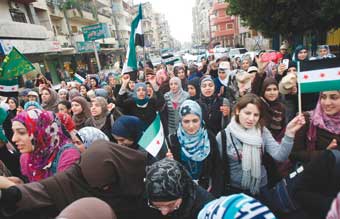 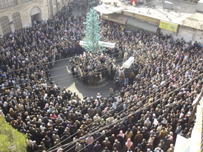 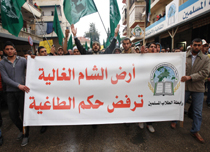 Search the Library Catalog to find books, journals (in print and digital), databases, DVDs, CDs and more in all campus libraries and beyond. The following are examples of Library of Congress Subject Headings used for this research topic: