Skip to main content
It looks like you're using Internet Explorer 11 or older. This website works best with modern browsers such as the latest versions of Chrome, Firefox, Safari, and Edge. If you continue with this browser, you may see unexpected results.

World of the West Norse: Vikings in England and France

Maps, illustrations and captions of the World of the West Norse: Viking raids from Norway and Denmark; the settlements the Norse founded in Western Europe and the North Atlantic 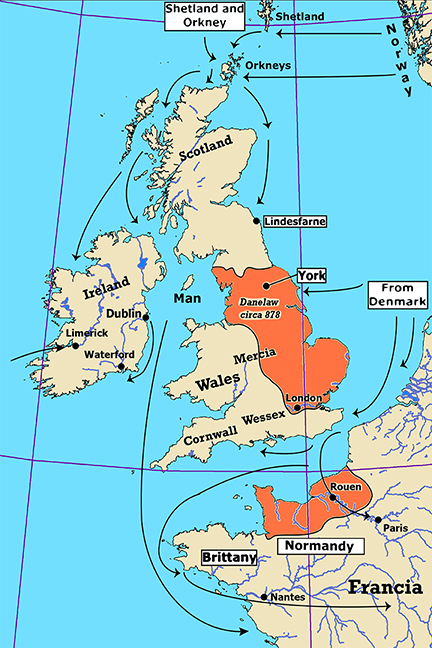 Shetland and Orkney, both settled by Norse ca. 800, were natural fortresses and launch sites for Norwegian Viking incursions throughout the British Isles. From these island bases the Norwegians raided the Hebrides, mainland Scotland, the Isle of Man and Ireland, establishing settlements in all these areas and leaving cultural and linguistic traces. In Scotland settlement concentrated on the northwestern fringe of the mainland and on the Hebrides; Man developed a hybrid Norse-Celtic culture; in Ireland, riverine incursions by the Norse were essential for military strategy and resource exploitation but settlement was limited to several coastal enclaves, with the exception of Limerick. Both Limerick and Dublin, which became a Viking city-state kingdom, were important trade centers, as were Wexford and Waterford in the southeast.

Initially ruled by Danish Vikings, the kingdom of York, based on the old Roman city Eboracum, was for the first half of the tenth century violently contested among Irish Norse, Danes, Northumbrians and Anglo-Saxons, with the English triumphing in 954.

Danish Vikings crossed the North Sea or skirted (and savaged) the Frankish coast (Frisia, Flanders), then descending the Channel and attacking both Francia and the Anglo-Saxon kingdoms in Britain. Although Viking raids on Anglo-Saxon territories commenced at the close of the 780s, the emblematic first major Viking attack on the British Isles was the devastation of Lindisfarne Priory in 793.

Lindisfarne (Holy Island) is just off the coast of Northumberland. The priory, founded by Irish monks from Iona, is likely to have produced the storied Lindisfarne Gospels, and more than one abbot of Lindisfarne was canonized. The house was both wealthy and relatively exposed, making it a target of opportunity for Vikings.

The Duchy of Normandy, created through the peace established in 911 between King Charles the Simple and Rollo, was a double-edged Frankish concession. The region was ceded to Viking settlement; these Scandinavians in turn protected the Paris region, so easily accessible along the Seine and other rivers, from fresh incursions and devastation. Place names and some archaeological evidence notwithstanding, Viking settlers, a minority in Normandy, assimilated rapidly and largely ceased commercial and cultural contacts with the Nordic world.

Displaced from rich targets southeast of Normandy, the Vikings completed a military—but not cultural or commercial—occupation of Brittany in the first half of the tenth century, and planned to invest Francia from Nantes, where the Loire offered a strategic route for advance. Breton resistance and military recovery foiled Viking intentions, however. Viking raids also continued farther south in the Charente region, throughout Iberia and on into the Mediterranean. 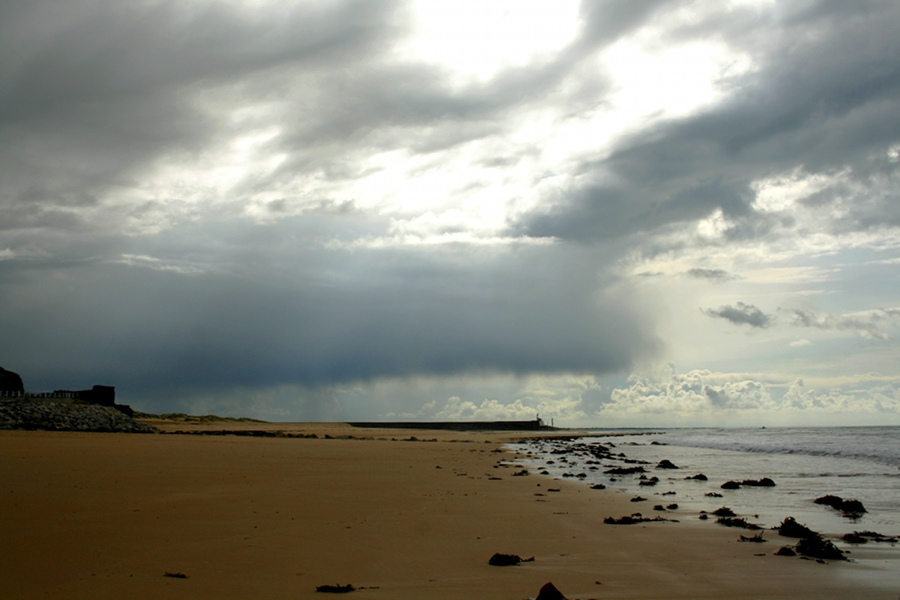 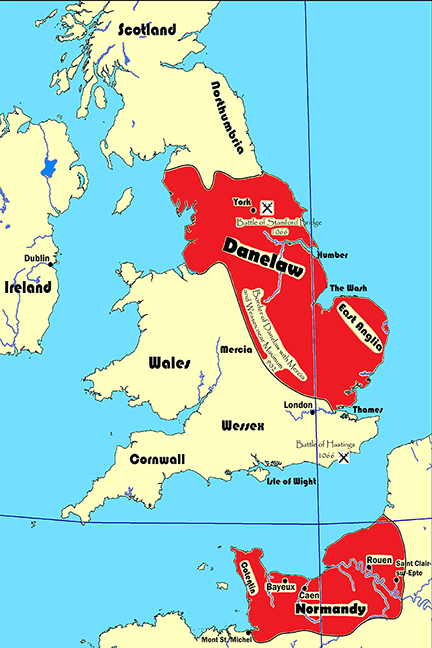 Outside of Scandinavia proper and Iceland, most Viking settlements in the West were geographically limited to relatively small islands—for which the sea itself, as well as the absence of significant subject populations, offered intrinsic defense—or individual cities, such as Dublin and Limerick. The two major exceptions were the Danelaw, referring initially to the region of England where Danish Norse law, not Anglo-Saxon law, prevailed, and Normandy, a territory conceded by the Franks to Danish Viking settlers around the mouth of the Seine.

This map shows each of these areas near their greatest geographical extent, but at different moments in history, as the Duchy of Normandy, created in 911, was established just before the English commenced their final reconquest of the Danelaw.

The southern border of the Danelaw is seen here near its maximum, in 902; a generation earlier (878), London was also within the frontier, which ran along the Thames. In the north Yorkshire, with the influential city (and erstwhile Viking kingdom) of York as its capital, remains among the regions of England most heavily influenced by the Norse in terms of language and place names. (Yorkshire was divided historically into three ridings, a word deriving from Old Norse þriðjungur (third).)

Although the English were relentless in desiring to reassert their power where the Danes held sway, Danish hegemony over the Danelaw collapsed in the early tenth century principally because of Danish internal weakness; moreover, many Danish settlers gave priority over campaign and rapine to plough and hearth alongside their Anglo-Saxon neighbors. Protracted conflict concluded in 954 when York passed into English hands a final time. A generation later a new round of Norse invasion and conquest afflicted England, lasting until a few weeks before Hastings in 1066.

Normandy arose as a duchy with the Treaty of Saint-Clair-sur-Epte in 911, through which the (West) Frankish monarch Charles the Simple granted lands around the mouth of the Seine to Rollo, one of several Viking chieftains perpetually engaged in raiding the Seine watershed during the late ninth and early tenth centuries. (Rollo was of debated Danish or Norwegian origin whose Norse name was likely Hrólfr.) The agreement confirmed Scandinavian settlements (populated diversely from Ireland, England, Denmark, Norway and Orkney) and enlisted Rollo and followers to protect Frankish cities inland from the duchy from the ravages of other Vikings.

The Scandinavians assimilated rapdily, intermarrying and adopting the local Romance dialect and then Old French. Among others, Guillaume de Jumièges in his Gesta Normannorum ducum (written around the time of the Norman Conquest of England) recorded the Viking origins and Norse identity of Normandyʼs founders.

Expansion of the duchy from the first land grant was westward and southward, finally embracing the Cotentin peninsula; the maximal frontier, reached in 1051, is visible here. In addition the Channel Islands (a British Crown dependency) were historically part of the duchy. Rouen was throughout the seat of the dukes of Normandy, and Caen, Bayeux, Avranches and Lisieux were among its major towns. 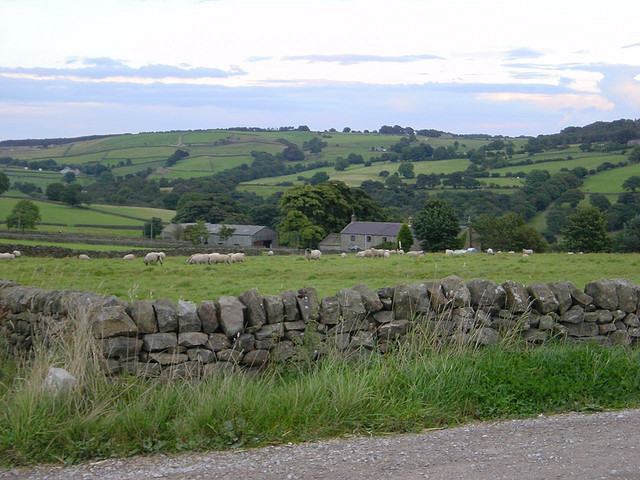 Yorkshire, taken by gollenr 2 Nov 2005, found in flickr, and available under a Creative Commons Attribution 2.0 license.