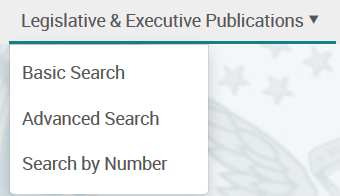 Finding the text of a bill or a law

About House and Senate Reports:

"Congressional reports originate from congressional committees and deal with proposed legislation and issues under investigation.

About The Congressional Record:

The Congressional Record is the official record of the proceedings and debates of the United States Congress. Released in a Daily Ed and, later, in the Permanent Bound Edition: "The primary ways in which the bound edition differs from the daily edition are continuous pagination; somewhat edited, revised, and rearranged text; and the dropping of the prefixes H, S, and E before page numbers." [GPO]

The Congressional Record is also available in print on Olin Level 5, Call number: J 11 R4+.
An index to the proceedings can be found at the end of each session, and in 5-year cumulative index volumes.
The "Daily edition" is also available to the general public from GPO FDSys from 1994 - .

About Congressional Hearings:
"A hearing is a meeting or session of a Senate, House, joint, or special committee of Congress, usually open to the public, to obtain information and opinions on proposed legislation, conduct an investigation, or evaluate/oversee the activities of a government department or the implementation of a Federal law. In addition, hearings may also be purely exploratory in nature, providing testimony and data about topics of current interest. Most congressional hearings are published two months to two years after they are held." [GPO]

Note: The decision to publish a committee hearing is left up to the committee. Some hearings remain unpublished, but they should eventually find their way to the National Archives. Some of these hearings were subsequently made available on microfilm and many are included in Proquest Congressional.  See U.S. Government Documents: A Finding Guide  for more information.

Note: The Permanent Bound Ed is also available in print, in Olin Library. It's shelved on Olin Level 5, Call number: J 11 R4+.
In addition, the "Daily edition" is available to the general public from GPO FDSys.

More Sources for US Government Documents

See also: United States Government Documents : The Congress, the Presidency and the Courts.