This research guide provides basic information on how to conduct research in foreign and international law.

Black's Law Dictionary (10th ed. 2014) defines foreign law as "generally, the law of another country". Foreign law covers the national and sub-national (e.g. provincial) laws of other jurisdictions. Not to be confused with comparative law, which is the study of domestic law between or among individual countries. Treaties and other international agreements fall under international law.

Beware before you start researching that access to foreign law varies greatly among legal systems. When beginning to research a legal system, you will want to do the following:

Free web sites available to all

There is some academic dispute over how to classify or group national legal systems. Most scholars seem to agree that there are five types of legal systems: civil law, common law, customary law, religious law, and mixed legal systems. Many systems are mixed because two or more legal systems operate within the same jurisdiction. The following paragraphs provide only a very general overview of legal systems.

Most civil law systems are based on comprehensive written codes, designed to address an entire area of activity (e.g. criminal law , commerce, civil procedure). Most countries have civil law systems. In these systems, courts ordinarily decide cases only for the parties before them; court decisions do not officially carry any precedential value. Civil law systems originated in Roman law but have evolved in different directions.

Customary law plays a role in some legal systems, though no country operates solely under a customary law system. Customary law tends to govern areas of personal conduct, inheritance, and marriage. Most often, customary law is unwritten and is dispensed by persons with elected or hereditary roles within a small community.

Most religious legal systems based on Islam, although some communities, and one country (Israel), operate in part based on Judaic law. Generally, religious legal systems operate within countries that also have a civil or common law system. Religious law usually applies to issues of personal status (e.g. marriage) and may apply only to some residents of a country.

Formed by professors from the Faculty of Law of the University of Ottawa, JuriGlobe contains general information about the legal systems and official languages of countries around the world. The site has maps and graphics that allow an easy comparison between countries. 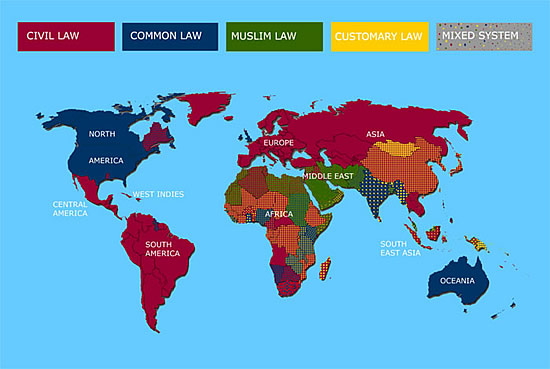 The Cardiff Index to Legal Abbreviations​ is a web-based service that allows the user to search for the meaning of abbreviations for English language legal publications, from the British Isles, the Commonwealth and the United States, including those covering international and comparative law. A wide selection of major foreign language law publications is also included. Publications from over 295 jurisdictions are featured in the Index. The database mainly covers law reports and law periodicals, but some legislative publications and major textbooks are also included.

CALI Lessons is an useful learning tool. They are computer-based, interactive tutorials that cover narrow topics of law. On foreign law, CALI offers the following lessons for:

To learn more about other available study aids, including Lexis and Westlaw, press here.

Cornell University Law Library offers a wide variety of online foreign legal resources, including the ones below. Need help choosing a resource? Contact the Law Library Reference Desk for help.​

For country-specific databases as well as others, press here.
Web Accessibility Assistance